Kerala is known as the "land of Spices". Even the Kerala cuisine is known for its spicy and hot foods. Traditionally, in Kerala food is served on a banana leaf. One has to take food with right hand. Almost every dish prepared in Kerala has coconut and spices to flavour the local cuisine giving it a sharp pungency that is heightened with the use of tamarind, while coconut gives it its richness, absorbing some of the tongue-teasing, pepper-hot flavours. The unusual cuisine of Kerala brings to the fore the culinary expertise of the people of Kerala. Producing some of the tastiest foods on earth, the people of Kerala are gourmets with a difference. The cuisine is very hot and spicy and offers several gastronomic opportunities. The food is generally fresh, aromatic and flavoured. Keralites are mostly fish-and-rice eating people.Kerala cuisine is a combination of Vegetables, meats and seafood flavoured with a variety of spices. Seafood's are main diet of Coastal Kerala. Whereas Vegetable is the main diet in plains of Kerala and Meat is the main course among tribal and northern Kerala. 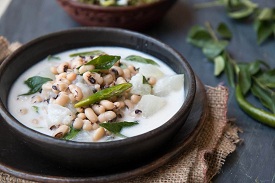 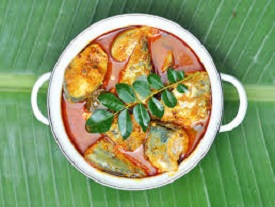 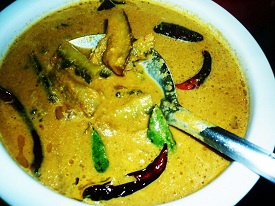 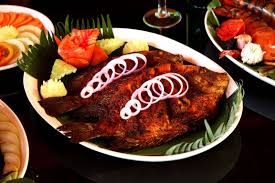